Menage a Deux: Our Review Of ‘Emily In Paris Season 2’ It’s about time that one of most controversial shows came back on Netflix. I am, of course, writing about Emily In Paris which, as it turns out, doesn’t have the amount of haters as Twitter would like me to believe. The haters understandably came in droves because of a viral out of context clip from the show. The one where the titular Emily Cooper (Lily Collins) Karens a hot chef, Gabriel (Lucas Bravo). But the show’s first season, in its entirety, is a lot of things. It is probably the most nihilistic piece of comedy in recent television under the guise of TBS era Sex and the City for millennials, reminiscent of Restoration comedy where the show literally uses moments of sexual harassment as….comedy.

Collins is in on the jokes. And Emily in Paris is a show that, through its gallows humour, created a bond between me and one of my room mates. That room mate, a Muslim who has never had alcohol or drugs, howled at the show. It’s like he’s been drinking the same amount of rose wine as I have. Or, to bring it back to the fictional world, imagine, or j’imagine, that moment in the opening credits of Sex and the City where a bus splashes Carrie Bradshaw’s tutu with New York gutter water but like five hours of that.

But now that we’re in the second season, ten hours of that. I missed the chance to write about the show during its first season because I normally only write about films, but I couldn’t pass the chance this time around. Simply put, this show is about a Chicago-dwelling protagonist moving to Paris. And, let’s return to the sexual harassment through line here. Emily’s move to Paris exposes her to the sexual amorality that’s both French and universal. Her boss at her ad firm, Savoir, Sylvie Grateau (Philippine Leroy-Beaulieu), sleeps with a married man who is also her client. That client, by the way, is Antoine Lambert (William Abadie) who Emily also has an affair with. Making things messier, she echoes Sylvie’s actions in another way. She sleeps with Gabriel even though he has an on and off girlfriend, Camille (Camille Razat). Camille happens to be one of Emily’s oldest friends in Paris.

Emily tries to bring them back together without Camille having to know that they slept together. Simply put, this is a show where she spends most of her time doing damage control in her personal life. Despite that, she makes everyone in her new life feel her presence even when she’s not on screen. It’s also a show where female characters wear either one shoulder pieces or puffy anything or both while trying to pull off emotional scenes or act human. Strangely enough, the iconic Patricia Field curated these pieces and why. Anyway, Judy Garland can pull that off with fake freckles on her face and these actresses can do it to. 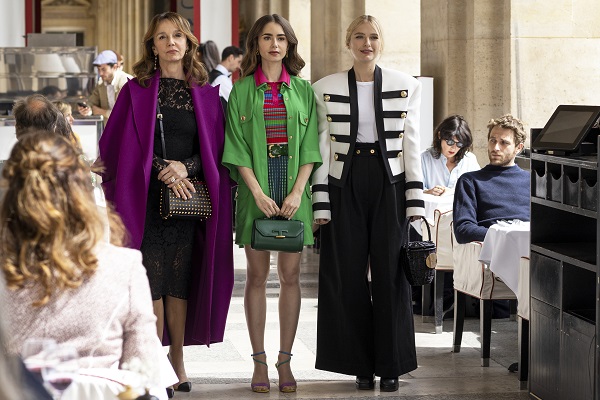 Yes, Camille Razat is the Judy Garland of her time. Pardon that hot take about Razat. Anyway, the scenes with her and Bravo add French to a show about…. France. And the same goes in the scenes featuring Leroy-Beaulieu, the show’s real MVP. As Sylvie, she has a complicated relationship with a restauranteur in Saint-Tropez, Laurent G (Arnaud Binard). Meanwhile, she catches the eye of a photographer Erik (Suren Bregendal), and that second relationship catches Antoine’s attention. These scenes, as well as some of the Gabriel scenes, toe the line where the show takes itself too seriously.

It’s weird to see flashes of a tone that some comedies end up using in its third, if not sixth season. Regardless, the Sylvie scenes both ground the show and give it levity. Levity comes as Sylvie butts heads with Madeline Wheeler (Kate Walsh), Emily’s real boss from Chicago, and Sylvie’a interactions while Madeline is appropriately bitchy. It gets bitchier as Madeline interferes with Sylvie’s business dealings with Pierre Cadault (Jean-Christophe Bouvet). (Cadault, pardon for stating the obivous, is a cross between Pierre Cardin and Karl Lagerfeld).

The success or failure of the Cadault account affects Emily’s position at Savoir. But before I get to my opinion about Sylvie’s men, let me return to Emily. Camille, the daughter of a Champagne brewer (?) named Champere, worked with Emily on the advertising of that brand during Season 1. But recent developments gets Camille to ice Emily off that account on the account of her ‘not knowing any French’. Emily, the people pleaser that she is who takes things literally, decides to take French classes where she meets a British guy. And because he’s British, Emily In Paris names him Alfie (Lucien Laviscount). Alfie, in the year of our Lord 2021, still has cord earphones, using them to ignore Emily so that she can sit somewhere else. But the camera lingers on him way too much that it telegraphs a plot point where they become friends. And this is where the writing falters, where she’s the obvious romantic to his cynic, and then he becomes romcom jealous. I want to give the show the benefit of the doubt here. So I’ll write that this is the show’s way of giving him character flaws but these flaws seem sudden. Alfie deserves to be better than an afterthought. Speaking of after thought, we can use the same word to describe Emily’s best friend Mindy (Ashley Park), whose relationships feel like a c-plot.

Although to be fair, Alfie and Mindy’s presence reminds viewers of the true Paris. The city of dog droppings and glass buildings and heatwaves and much as it is the City of Love. People are going to talk about the Godard reference here (thanks to Luc (Bruno Gouery), which, how dare you, just reference Varda instead. But there are traces and references to Preston Sturgess and Gus Van Sant here. I like deep cuts in otherwise frothy TV that also references the Housewives. Either way, I took a test and apparently I’m a Julien (Samuel Arnold). Also, even if I didn’t post pictures of them, #TeamAlfie, #TeamLaurent, but will Emily and Sylvie choose them or choose other guys? I guess viewers will have to find that out by watching.

Emily in Paris returns with its second season on Netflix.