It’s truly never an easy thing to gauge when we are in a market like the city of Toronto and you have to decide what to see and what not to see.  As a critic, I have at least deemed it my job to try and not only see everything but to go out of my way to see things that I haven’t seen as well and just when I think that there just aren’t any more mountain’s to climb in the cinematic world, I get humbled and knocked on my ass once more as these Imitations of Life: The Films of Rainer Werner Fassbinder; yet another comprehensive retrospective from our friends at TIFF.

It kicked off last weekend with some of his more memorable efforts like The Bitter Tears of Petra Von Kant and Ali: Fear Eats The Soul which not only shows his penchant for the bent in Kant which made him somewhat of a controversial figure who was never afraid to push boundaries as it plays like a piece of operatic porn.  It’s the kind of film that wants to revel in its inherent style while simultaneously watching it all burn and this dual nature of it all is what makes it so compelling to watch; it’s gloriously decadent and filthy all at the same.  Meanwhile Ali is very much a love letter to one of his major influences and is a partial remake of Sirk’s All That Heaven Allows.  It’s a film with a remarkable clarity of vision and beauty as the struggle and ineptitudes of the class system and its systemic racism has killed countless people during times when it shouldn’t have.

However much like any good retrospective, and much like a classic record it’s all well and good to seek out and enjoy the hits of someone’s career but when you start diving into the deep cuts is when you truly start to broaden your mind and your education about what a story teller truly brings to the table. 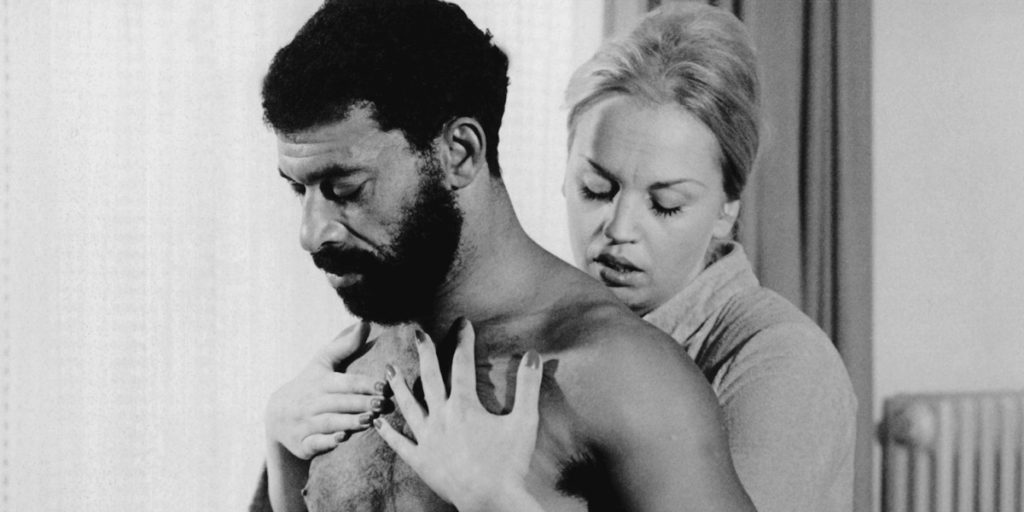 Screening tonight at the Lightbox, Effi Briest is in many ways the purest example of the kind of scope and message that Fassbinder tried to bring to the table every time he made a movie.  A stunning period piece which is an adaptation of Theodor Fontaine’s 19th century novel and tells the story of a young bride who is ruined by a brief moment of unbridled passion and plays along the same lines as stories like Anna Karenina & Emma Bovery.  Shot in black and white and paying great attention to the time period, it feels very much like a window on the lives of these incredibly human yet wholly tragic characters.  It’s a true collision of the visual arts and design and an ensemble of actors on top of their game.  Following the beats of his career and his life that got cut far too short, on Friday there is a screening of Fox & Friends; a raw portrait of how the class structure truly exploits itself with a little bit of a sadomasochistic bent that makes you feel like this is an enjoyable experience.  It’s raw and it’s honest in how it looks at the world, and that’s where Fassbinder truly got it.  He was entertaining audiences while being brutally honest with them all at the same time.

He told stories of how truly terrible we can be to one another, and on Nov 12th we get to kick off something rarely experience on the big screen.   Berlin Alexanderplatz is a TV mini-series that takes us to Berlin in the late 1920’s as Franz Bieberkopf (the idominatable Gunter Lamprecht) as he finds himself out of prison and vowing to go straight only getting lured back into a world that he wanted to get away from.

Getting to see what is essentially an 11 hour movie in the theatre…even spread over two weekends is something that is rarity and will be there in the house for the whole damn thing.  I’ll be looking at it in a separate piece and examining how some things even when witnessed on the big screen are simply better when they are bigger.  Plus as an added treat; the first two screenings of Berlin Alexanderplatz will be introduced by Barbara Sukowa, young co-star of this iconic mini-series who won an award for her performance and will be in the house to provide some unique perspective on the man that was Fassbinder. All in all when you ask ‘To Fassbinder or not to Fassbinder’, the answer is an unequivocal ‘To Fassbinder’ for anyone who is remotely unfamiliar with the work of this iconic German auteur, the Lightbox has yet another season of must see viewing for all kind of film fans looking to expand their knowledge or to simple revisit some absolute gems the way they were meant to be seen.

Imitations of Life: The Films of Rainer Werner Fassbinder runs until Friday December 23rd check with TIFF.net for ticket information.