All About Facts: Our Review of ‘She Said’ A long time producer in Hollywood, the industry revered Harvey Weinstein for his work.  His credits are a largely impressive list of popular and award winning films including Pulp Fiction, The King’s Speech and Oscar winner Shakespeare in Love.  Yet behind the scenes, we now know Weinstein was an abuser, a bully, a sexual harasser who time and time again used women and destroyed their careers if they refused his unsolicited advances.  He was protected by those around him; protected by a system that let him continue his successful work amongst rumours that were killed with payouts and non-disclosure agreements.  It was “cash for silence.”

Ronan Farrow, who published the book Catch and Kill, is probably the more famous face of this news piece. But this film is about two reporters for the New York Times, Jodi Kantor and Megan Twohey. Both are responsible for breaking the Weinstein story.  She Said follows these women over the many months of investigative journalism that led to their story being published on October 5, 2017.

Megan Twohey (Carey Mulligan) is on maternity leave.  In 2016 she broke news of Donald Trump’s sexual misconduct, leading to her receiving death threats.  She’s in the throes of postpartum depression when a colleague, Jodi Kantor (Zoe Kazan) e-mails her for advice about how to get women who have experienced harassment, or worse, to tell their stories.  She is working on a piece investigating the rumours around sexual harassment in Hollywood, and she’s honing in on Miramax.  She has leads with both famous actresses (including Ashley Judd, who plays herself) and those who were assistants to Weinstein and employees at the company, but is having difficulty getting them on the record.  Twohey returns to the Times, hopeful that concentrating on work will help her mental health. She joins Kantor on what will eventually be a story that propels a revolution. 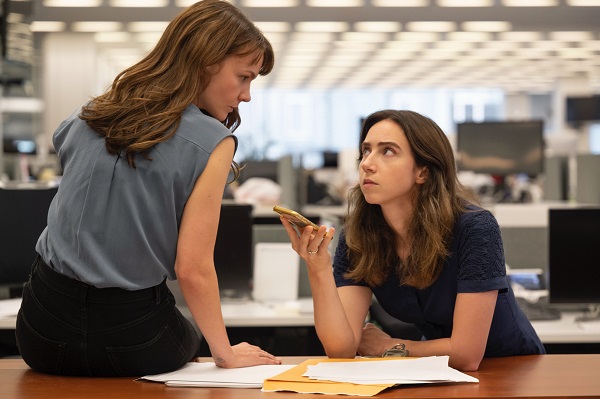 Like 2016’s Oscar winner for Best Picture, Spotlight, She Said truly focuses on the process and importance of investigative journalism.  At a time when journalism itself seems consistently under fire, this film depicts the lengths reporters must go through to collect and confirm facts and sources until indisputable truth remains.

She Said is a factual, procedural story, one that is perhaps not terribly cinematic per se. Yet it’s humanized through its honesty, and its sensitivity. The qualities appear not just in the telling of each woman’s story. But it also manifests in how it depicts Twohey and Kantor.  Propelling She Said are the solid performances from Mulligan and Kazan. Both play these reporters with a sense of unparalleled determination. It never turns a blind eye to how the investigation impacts them and their families.  They are not infallible.  They stumble, there are attempts to block them. But every woman’s story affects them, only urging them on in their purpose.

The supporting cast here is as well to be credited with much of She Said‘s success.  Patricia Clarkson and Andre Braugher make the most of their limited screen time as editors at the paper.  Samantha Morton plays Zelda Perkins, a woman who directly influences a turning point in the investigation.  She has just one scene, but Morton is memorable. It’s reminiscent of her short time in another film this year that will make a splash for awards season, The Whale.  Yet, it is the performance of the treasure that is Jennifer Ehle that left me haunted.  As Laura Madden she is resolute and inspiring, a woman undergoing all kinds of personal trauma who shows incredible strength. She Said is directed by Maria Schrader, who won an Emmy for her work directing the mini-series Unorthodox, and last year helmed the wonderful I’m Your Man (in Canada, you can find it streaming on Crave and I highly recommend it).  While the procedural nature of the film limits her slightly, she makes wise choices in its execution.  Instead of depicting the horrific encounters with Weinstein, Schrader stays with the women narrating.  In the case of Ambra Gutierrez, the film uses the actual audio that the police had her secretly record. The film lets us listen to them recount their stories. With those sounds, the director displays settings (empty hallways, a used hotel room) and allows the women’s words to paint the horrific scenes.  It creates moments of sensitivity instead of exploitation that are affecting and impactful.

It can sometimes be hard to separate the importance of a film like this, and the passion you might feel for its subject matter, from whether the movie itself is actually good.  Luckily in this case, these aspects seem to balance.  She Said allows us to listen, in fact demands that we do.  Each woman’s story is important, each encounter affecting them differently.  “I feel like he took my voice that day, just when I was about to start finding it,” Ehle’s character says. These women are victims of assault and harassment by this heinous producer in power. But the work of Twohey and Kantor gave them their voice back.  More than that, it shifted the balance of power itself, not just in Hollywood but outside the industry as well.  It’s a journey far from over.