Tzod scales a frozen wasteland to the peak of a mountain. She is searching for the blossom of a flower, a blossom that gives unimaginable powers to those who use it. At the base of a giant skull she meets The Guardian, keeper of the last of these powerful flowers. Old, frail and knowing his days are coming to an end like the life of the blossom he protects The Guardian and Tzod tell tales of the life of the flower and their own understandings of its powers.

There is the tried and true idiom, they don’t make them like they used to. Rotoscoping animation is still very much in practice today, though it is done by computers now instead of painting onto glass slides. Today’s modern tools would in theory make the process easier, no? But say you were a small independent production that took it upon themselves to make a love letter to animated fantasy films from the 70s and 80s from directors the likes of Ralph Bakshi.

And say you were a small production, using only a handful of animators to make a feature length film. Did the filmmakers behind The Spine of Night ever think that doing it ‘the old fashioned way’, painting over each frame by hand, would take seven years to complete? The leaps and bounds that the animation industry has made over the years is astronomical yet co-directors and co-writers Morgan Galen King and Philip Gelatt having started this project so long ago even went so far as to refrain from updating the hardware and software they and their small team were using to make The Spine of Night. The result is an uncorrupted level of quality and consistency throughout. The Spine of Night builds off of an idea we saw in King’s short film Exordium. They’ve migrated The Guardian (now voiced with quiet richness by Richard E. Grant) to watch over the source of disputed power but the premise remains the same. It is a simple plot and familiar story for the sword and sorcery genre. Man seeks power to control their fellow man and to manifest the cosmos. This magical blossom gives them that power; they who have the blossoms have the power.

Full of graphic violence and cosmic wonder no head nor limb was spared. Though the accuracy of human anatomy may be in question there is nothing quite like watching swords dig deep into flesh and through bone. Blood flows freely. Skeletons gather in piles. Viscera litters the ground. It far exceeds anything that we saw in, say, Bakshi’s Lord of the Rings, where the death of Boromir still to this day leaves a mark. The Spine of Night gets high marks for an astonishing and excellent display of violent savagery across the board.

Come for the violence, stay for the voice talent. One of The Spine of Night’s selling points leading up to the world premiere last week was the voice talent King and Gelatt enlisted. Revel in the sneer of Patton Oswalt, the growl of Joe Manganiello, the tenderness and resignation between Richard E. Grant and Lucy Lawless, the reverence and fear of Betty Gabriel and the contempt from Larry Fessenden.

I understand why Fessenden is not mentioned in the promotions, it does not mean that I have to accept it. Fessenden, a prominent voice (ha ha, I see what I did there…) and leader in the current horror movement, needs to be mentioned in the same breath as the main cast, is so good as the Prophet of Doom. He plays the leader of a cabal of priests who would rather hoard texts and volumes of knowledge than look after the people in their small fiefdom. We also see that the consumption of knowledge, keeping it to one self, is also a grasp at power as well. 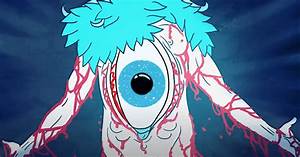 The Spine of Night is a loving ode to those animated fantasy films of yesteryears. The reason I’ve referred to Bakshi’s Lord of the Rings so much in this review is that as I was watching The Spine of Night I was almost immediately I was drawn back to those childhood memories of days when you could show a classroom of grade school children and no parent would lose their frigging minds over it.

I know I got away with films like Lord of the Rings back then because my parents had deep respect for Tolkien who ran in the same social circle as C.S. Lewis. Both authors’ bibliographies have a place in the family library though Lewis’ may have been kept closer to family scriptures on the bookshelves.

I don’t think we would have gotten away with the level of violence that is portrayed in The Spine of Night. Holy moly is it awesome. I had to suppress a long dormant childlike reflex to look back over my shoulder and make sure my mom wasn’t looking over my shoulder tut-tutting my cinematic choices.

The Spine of Night is just like the animated sword and sorcery movies I watched when I was a kid. Except this time, due to the level of violence and death, I feel like I’m getting away with something forbidden. What a rush!

PLUS…listen to ‘In The Seats’ editor Dave Voigt interview Writer/Director’s Morgan Galen King and Philip Gelatt for “In The Seats With…” right here.

This post was written by Andrew Mack
Andrew spends the bulk of his time as the news editor over at Screen Anarchy where he set up shop over 15 years ago. From time to time he is let out of the house and he will travel to festivals here in Canada and abroad, with a focus on the IberoAmerican region. His Spanish sucks large but somehow he still gets invited to attend festivals and markets down there. He’s been described as Chaotic Neutral and once he looked it up on Google he decided that it was accurate.
My Twitter »