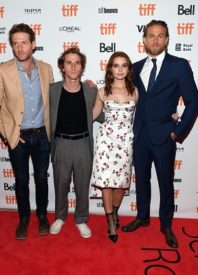 The film is primarily a love story between two brothers. Life tests their bond as they hustle and scrape towards their slice of the American Dream. Stanley (Hunnam) and Lion (O’Connell) are brothers struggling to stay relevant in the underground world of bare-knuckle boxing.

Stanley fails to pay back a dangerous crime boss (Jonathan Majors, Lovecraft Country). The boss forces them deliver an unexpected traveler (Jessica Barden) as they journey across the country for a high stakes fighting tournament.  While Stanley trains Lion for the fight of his life, a series of events threaten to tear the brothers apart. But their love for one another and belief in a better life keep them going in this gripping drama that proves family pulls no punches.

Max Winkler wrote and directed JUNGLELAND, which received its world premiere at the Toronto International Film Festival 2019. Winkler is currently adapting and will direct adventure photographer Ben Moon’s memoir Denali: A Man, A Dog, A Friendship Of A Lifetime. That project will reteam Winkler with Charlie Hunnam. Winkler also directed the pilot and will executive produce Cruel Summer, which got a full series pickup by Freeform. Previously, Winkler directed the feature film Flower, starring Zoey Deutch, Adam Scott, and Kathryn Hahn. Flower is a dark love letter to his teenage years in the Valley. It is a coming of age story that tracks the unorthodox bond between a sexually curious teen (Deutch) and her mentally unstable stepbrother. Winkler made his feature directorial debut with Ceremony starring Uma Thurman, Michael Angarano and Lee Pace. That film premiered at the 2010 Toronto International Film Festival.

With writing partner Matt Spicer, Winkler adapted and will direct Mick Conefrey’s  The Adventure’s Handbook with Jonah Hill. The pair will also executive produce the film, alongside Hill, for Universal. Together the pair has written The Ornate Anatomy of Living Things for Fox Searchlight. They also wrote Whispers in Bedlam and is writing the reboot of  The Rocketeer for Disney. A graduate of USC film school, Winkler and his schoolmates received a grant to make their short film The King of Central Park. He first drew industry attention when the film was selected for several film festivals, which established him as a filmmaker to watch.

Jessica Barden is becoming one of Britain’s young rising stars. In addition to her powerful role in Jungleland, she delivers an incredible performance in Holler with director Nicole Riegel. The film recently debuted at the Deauville Film Festival and Toronto Film Festival. It received rave reviews where critics deemed Jessica’s performance as her Winter Bone. She also plays the title role in Pink Skies Ahead directed by Kelly Oxford. The movie tells the story of a wild young woman whose life unravels after dropping out of college. She moves in with her parents, and being diagnosed with an anxiety disorder.

Barden is set to resume production opposite Toni Colette in the Netflix series Pieces of Her which will likely premiere next year.

Additional credits include Barden’s portrayal of Alyssa in the breakout Channel 4 Netflix series The End of The F***Ing World. That show was awarded a BAFTA TV Award for Best Drama Series. Barden previously appeared in the Australian miniseries Lambs of God based on the book by Marele Day opposite Ann Dowd for director Jeffrey Walker. Jessica starred in The New Romantic which won best feature at the 2018 SXSW festival for up and coming director Carly Stone. She starred in the Cannes Jury Prize-winning The Lobster opposite Colin Farrell and Rachel Weisz, in the memorable role of ‘Nosebleed Woman’. She also played Carey Mulligan’s loyal confidant in last year’s Far From The Madding Crowd. Barden made her U.S. television debut in the final season of Showtime’s Penny Dreadful. Previous credits include her work as ‘Kayleigh’ on the world’s longest-running soap, Coronation Street. She appeared in the BBC mini-series The Outcast, Lullaby. THR critic Sheri Linden called her terminal patient character’s “vulnerability fully felt”. Lastly, she was in Joe Wright’s Hanna and in Tamara Drewe.

Jungleland arrives on Premium Video-On-Demand and Digital on November 10.

Bonnie Laufer spoke with both Director Max Winkler and Jessica Barden about working on Jungleland.

Both interviews can be watched in the playlist below.