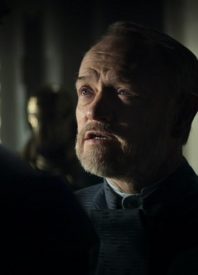 It’s been a long time coming, but someone finally adapted Isaac Asimov’s classic Foundation novels into a series.

Foundation is the epic saga that David S. Goyer’s team adapted from Isaac Asimov’s timeless trilogy of the same name. The trailer reveals a deeper look than ever before at the unprecedented adaptation. It invites audiences across the galaxy to embark on a thrilling and emotional journey. The show follows a band of exiles who make a shocking discovery. The only way to save the Galactic Empire from destruction is to defy it. Helmed by visionary showrunner and executive producer, David S. Goyer, the first season of Foundation will exclusively hit Apple TV+ worldwide. It premieres on September 24, 2021 with the first two episodes available, followed by one new episode weekly every Friday.

Revolutionary Dr. Hari Seldon predicts the impending fall of the Empire. Believing this, he and a band of loyal followers venture to the far reaches of the galaxy. They establish The Foundation in an attempt to rebuild and preserve the future of civilization. However, Hari’s claims enrage the ruling Cleons — a long line of emperor clones. They fear their unrivaled reign may be weakening. That’s because Hari’s claims force them to reckon with the potential reality of losing their powerful legacy forever.

The scope of this series will amaze you. You will be in disbelief to learn something about the show’s production. Yes, they use plenty of visual effects enhance the show, but there was barely any green screen work. The art directors built all of the sets to scale so that the actors had a fully immersive experience.

Our Bonnie Laufer caught up with several of the cast members including Jared Harris, Lee Pace and showrunner David S. Goyer.

You can check out ALL of the interviews in the playlist below.