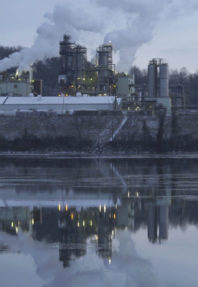 The alarm sounds on chemicals being dumped into the public drinking water in The Devil We Know, a sleekly-produced and ominous documentary from a team that went after the gun lobby and sugar industry.

For decades the industrial giant Dupont produced and released a chemical called C8 without knowing its harmful side effects, and then later denying its harmful side effects. The result is a town who saw an rise in cancer and birth defects. And it all has to do with Teflon, a product beloved by all and used in so many different products that its reach spanned the globe and every walk of life.

While Dupont is the villain in this film, attempts are made, poorly, to speak to a greater problem. It’s just not clear what that problem is. The film follows local residents and workers from a West Virginia town where Dupont had a big impact; meanwhile, we also follow legal cases, political strong arming, and scientific manipulation. There is a lot going on, but it’s unclear the larger message beyond be careful what you drink, and don’t trust the government.

The film seems to think about waging an attack on capitalism or globalism. What’s more, the title suggests that we as citizens are simply too complacent. When a lawsuit is settled, there are those saying the payment pales in comparison to the damage done.

And all of that may be true, but the film doesn’t earn enough good will or trust to make any argument that compelling. By the end, the foreboding music has been turned up, and stats are plastered on the screen meant to fill you with dread and unease. It’s time for a drink.